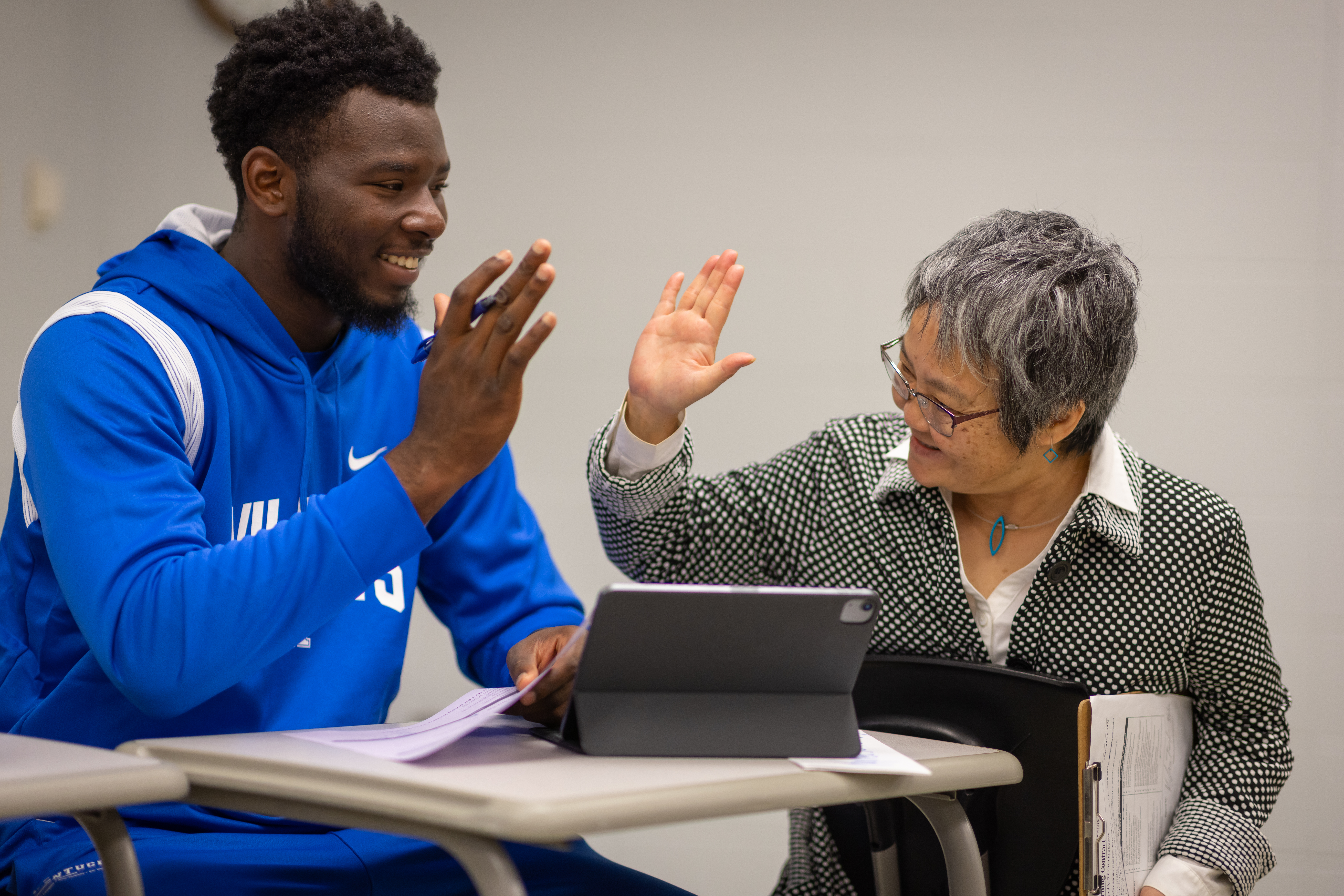 UK professor recognized by ESPN2 for ‘Going the Extra Yard’

One player might be tasked with blocking an assigned defender, while another is focused on carrying the ball swiftly and securely.

Some positions, though, might be asked to do all of the above — and then some.

Keaton Upshaw, a senior tight end for the Kentucky Wildcats, understands the demand of one of football’s true hybrid positions.

Running routes and catching passes on one play, then blocking a linebacker the next, means taking extra steps in practice to be prepared. It means, sometimes literally, going the extra yard.

On the gridiron, Upshaw has coaches to guide him. But off the field, he also has someone who is encouraging him to do more, learn more and be more.

“Professor Tanaka pushes you to be the best,” Upshaw said. “She stays on top of you to go harder to reach your goals. I work hard because I don’t want to let her down.”

Keiko Tanaka, Ph.D., has a dual appointment in the College of Arts and Sciences and the College of Agriculture, Food and Environment (CAFE) at the University of Kentucky.

“My philosophy is to facilitate students to become the very best people they can be. To put this into action, I treat my students — athletes or not — with respect and compassion,” Tanaka said. “I end up spending a lot of time with my CLD advisees — listening to their aspirations, fears, hopes and concerns over in-person and virtual meetings, as well as through text messages and phone calls. It’s a 24/7 job.”

For her unmatched compassion and dedication, Tanaka was recently recognized on ESPN2 during the “Extra Yard for Teachers” segment. Throughout the eight-day celebration, the football community strives to recognize and honor great educators.

Tanaka was nominated by several Wildcats for her ability to connect with her students as a teacher and a mentor. “I had her my freshman year, and she still texts me to check on me,” Chris Rodriguez Jr., senior running back, said.

“Dr. Tanaka wants the best for us, and I always wanted to do my best for her,” Jordan Wright, outside linebacker and graduated senior, added. “She stayed on me, and without her help, I wouldn’t have graduated — that’s for sure.”

“I’m extremely honored,” Tanaka said. “No words can express how I felt when I saw the segment.”

Tanaka doesn’t view her efforts as going above and beyond. Instead, she sympathizes with her students — recognizing they are under immense pressure to perform on and off the field.

“They are under constant pressure — not only academically, but also athletically. Coaches, fans and professional teams are monitoring their progress and expecting them to ‘deliver’ results,” Tanaka said. “When you come to think about it, that’s an enormous amount of pressure for an 18–24-year-old to endure.”

Tanaka works closely with CATS advisors, and each and every day she challenges herself to “go the extra yard” to help each of her student-athletes find success in their academic and athletic careers.

"I ask myself: How can I help these students build self confidence in facing new challenges and solving unfamiliar problems? That’s why I make myself available to listen to my advisees and take their stories and voices seriously,” she said. “During their time at UK, I often end up sharing in the ride of their emotional roller coaster — supporting them in their time of need and celebrating their wins."